If the Fates Allow: A Regency Historical Holiday Novella 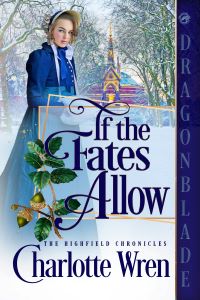 He knew his heart could never belong to anyone but her.

He knew his heart could never belong to anyone but her.

On a foggy winter’s morning in Hyde Park, Isaac Northcott, the seventh Earl of Hutton, is involved in an accident and thrown violently from his horse. In the darkness that follows, he first hears a sweet voice and then opens his eyes to see the beautiful face of a young woman gazing down at him. But, before he can learn anything about her, she is gone without a trace. Had he imagined her? Was she simply an illusion brought about by a bump to his head? And, if she was real, how on earth would he begin to find her?

Miss Eleanor Harrington hears the thunder of hooves in the fog and given the dangerous conditions, wonders at the folly of the riders. When the inevitable accident occurs, she hurries to help and finds herself gazing into a handsome face and a pair of beguiling gray eyes. When the nearby sounds of other voices reassure her of the stranger’s safety, she dares to leave him and goes on her way, not wishing to be involved in the questionable incident. But the memory of the man’s face will not leave her mind. Oddly, there are no subsequent reports of the accident, almost as if it never happened.

Questions remain unanswered for both of them.

Yet Isaac and Eleanor are destined to lock eyes once more, this time at a Christmas Ball. But before Isaac has a chance to speak to her, Eleanor disappears once more, leaving Isaac with unanswered questions. Eleanor, at last realizing who Isaac is, has a reason to vanish, but she underestimates his resolve. He means to find her, to tell her that she has somehow managed to capture his heart. But where to begin? He still doesn’t know her name.

In the end, all he has to do is go back to the day of their first meeting, that foggy Sunday morning in the park. For there are clues to be found there, answers to his questions, and the future he hopes for.

If the fates allow.

Charlotte Wren writes heartfelt historical romances set in the Regency and Victorian eras. Her new Regency/Victorian series, 'The Highfield Chronicles', is currently in the works, with the first full-length novel set for release in 2022 through Dragonblade Publishing!