Rescued by the Lyon 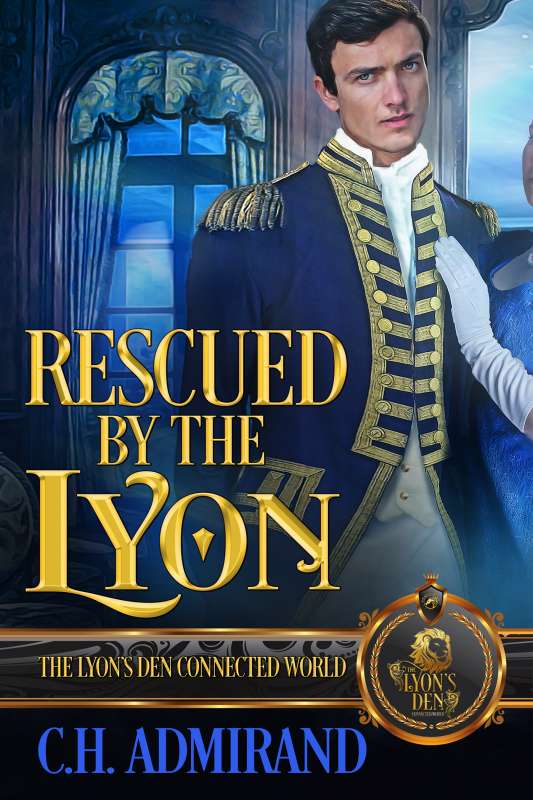 Will they get more than they bargained for when fate takes the helm, or discover their perfect match and love of a lifetime?

Captain Colin Broadbank returns to London aboard the HMS Britannia, and receives the tragic news his elder brother, Viscount Moreland, has perished from a virulent fever, and the life-changing edict that he is expected to leave the life he loves serving in His Majesty’s Royal Navy. He is swept up in Earl Moreland’s dictate that he accept the title, marry immediately and live the life of a titled landlubber!

Unwilling to add to his grieving family’s burden, he accepts the title, but refuses to let his father parade suitable brides in front of him. The last thing he wants is a simpering miss just out of the schoolroom without a thought of her own. At his younger brother’s suggestion, he decides to try his luck, and find his own bride, at Mrs. Dove-Lyon’s famed establishment–The Lyon’s Den.

Miss Gemma Atherton’s father is a wealthy Cit, with an eye on maintaining control of her considerable fortune after he marries her off to an older business contemporary, one who will agree to go into business with him for the next five years. He treats her like the bag of coin she begins to feel is all that recommends her.

When her father discovers Gemma’s younger brother has not quit gambling, he threatens to send her brother to America. She cannot bear for that to happen. Not a typical young miss, Gemma takes her future in her own hands. She sews a reticule large enough to conceal her grandfather’s dueling pistol, hires a hack, and heads to The Lyon’s Den. Her plan is to meet with Mrs. Dove-Lyon and persuade her to find a husband who will agree to pay off Gemma’s brother’s debt before he accepts Gemma’s dowry.

Convinced their future is in their own hands, the two are bent on a course of their own making—destined to collide in the midst of The Lyon’s Den!

Will they get more than they bargained for when fate takes the helm, or discover their perfect match and love of a lifetime?

C.H. was born in Aiken, South Carolina, but her parents moved back to northern New Jersey where she grew up.

She believes in fate, destiny, and love at first sight. C.H. fell in love at first sight when she was seventeen. She was married for 41 wonderful years until her husband lost his battle with cancer. Soul mates, their hearts will be joined forever. They have three grown children—one son-in-law, two grandsons, two rescue dogs, and two rescue grand-cats.

Her characters rarely follow the synopsis she outlines for them…but C.H. has learned to listen to her characters! Her heroes always have a few of her husband’s best qualities: his honesty, his integrity, his compassion for those in need, and his killer broad shoulders. C.H. writes about the things she loves most: Family, her Irish and English Ancestry, Baking and Gardening.

Take a trip back in time to Regency England for her new series: The Lords of Vice, coming in 2021 from Dragonblade Publishing! Venture back to the Old West with her bestselling Irish Western Series. Fast-forward to the present, stopping at the Circle G Ranch in Pleasure, Texas, before finally landing in Apple Grove, Ohio–Small Town USA–for a slice of Peggy McCormack’s Buttermilk Pie!