The Awakening of Lord Ambrose (The Lost Lords Book 6)

Book Six in the bestselling Lost Lords series has arrived! Passion, mistrust, and wicked intentions abound in this exciting Regency Historical romance. Read for FREE in Kindle Unlimited!Cornelius Garrett, Lord Ambrose, has withdrawn from society in the wake of scandal in order to focus on finding th...

Cornelius Garrett, Lord Ambrose, has withdrawn from society in the wake of scandal in order to focus on finding the numerous illegitimate children that his father sired. Desperate to locate his many siblings and build some semblance of a family for himself, Cornelius is ill-prepared for the many complications that his most recently discovered sibling, Lila, brings with her—namely her older sister, Primrose Collier.

Primrose is the most stunningly beautiful woman he’s ever encountered. She’s also fiercely proud and protective with a well-founded distrust for the opposite sex. It takes all of his considerable powers of persuasion to convince her to bring her young siblings and move to his estate, Avondale.

However, no good deed goes unpunished. Cornelius’ unscrupulous neighbor, Lord Samford, also has a prior acquaintance with the Collier family. Threatened by their presence and the ugly secrets of his past that they might expose, Samford sets out to eliminate what he views as a complication.

Samford’s machinations result in Prim being injured and spending a night, unchaperoned, with Cornelius. In order to preserve Prim’s reputation and also to afford her and her siblings more protection, Cornelius proposes marriage. But it isn’t all duty and obligation. For the first time in his life, Cornelius must find balance between what honor demands and what he desires.

Determined to stop Samford at any cost, they set out on a journey fraught with danger and with discovery. Primrose has awakened something inside him he did not know existed—something fierce, passionate and impetuous. Could it be love?

The Lost Lord Series order:
The Lost Lord of Castle Black
The Vanishing of Lord Vale
The Missing Marquess of Althorn
The Resurrection of Lady Ramsleigh
The Mystery of Miss Mason
The Awakening of Lord Ambrose 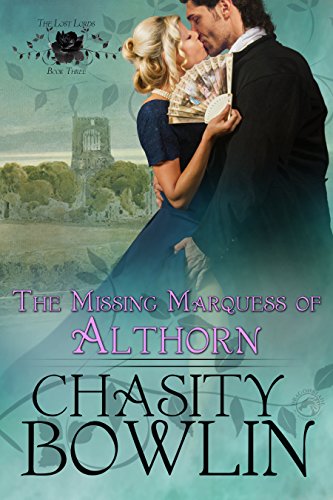 The Resurrection of Lady Ramsleigh (The Lost Lords Book 4)
Preview
Disclosure of Material Connection: Some of the links in the page above are "affiliate links." This means if you click on the link and purchase the item, I will receive an affiliate commission. I am disclosing this in accordance with the Federal Trade Commission's 16 CFR, Part 255: "Guides Concerning the Use of Endorsements and Testimonials in Advertising."