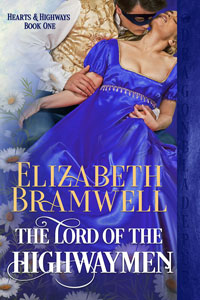 It's one thing to pretend to be a highwayman, but quite another to hold up the lady you love. Dive into book 1 of the new Hearts & Highways series by Elizabeth Bramwell. Read for free in Kindle Unlimited!

Elizabeth Bramwell is a writer and amateur historian living in Alberta, Canada. A Brit by birth, she adores the winter, which is probably a good thing considering how much time she spends in the mountains. Her hobbies include buying history books, dying her hair vibrant colors, herding cats, hanging out with her kids, and transcribing 17th century Welsh wills – which is actually a lot more rock and roll than it sounds. When she grows up, she would like to be a llama farmer, but so far her partner has vetoed the career move. He said no to the pygmy goats as well.