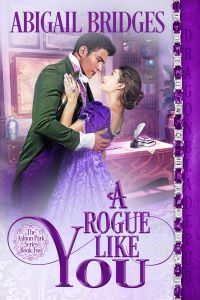 After years of living the life of a rogue, Lord Robert fought his way back into the good graces of Society and an elaborate wedding awaits. It’s not the love match, but a duke’s daughter is the perfect solution to his profane past. The only obstacle remaining to the marriage contracts is his long association with Campion’s Gentlemen’s Emporium, a notorious gaming hell.

Lady Eloise Surrey, on the other hand, is at the end of her time in Society. A lace-capped spinster, Eloise acts as a chaperone to Lady Lydia Rowbotham, the soon-to-be betrothed of Robert, and she plans to exit to the country after the wedding.

Then her younger brother Timothy is kidnapped, and Eloise, determined to track her brother’s last movements, is drawn into London’s dark underworld—starting with Campion’s, the last place Timothy was seen.

Disguised as a man, Eloise heads to the emporium, bringing her face-to-face with Robert. He is immediately drawn to the tenacious woman, even though Robert realizes her quest is futile. He tries to discourage her, but the spark that flies between them is irresistible. So Robert and Eloise strike a bargain to help each other out—a bargain that could tumble both into ruin.

But they will not stop. With Timothy’s life as stake, Robert and Eloise target one of the most notorious and dangerous organizations in London. As their passion for each other deepens, their determination to find Timothy could cost them everything—even their lives.

Get your copy of A Rogue Like You HERE today!

**NEW RELEASE** The Kiss of Love by Meara Platt