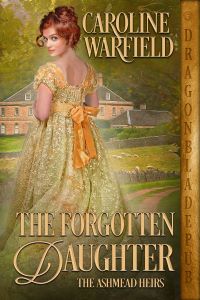 Fanny’s worthless father forgot her entirely. The earl’s steward plans to make it right; if only he can avoid falling in love with her while he does.

Welcome to book 3 in the fabulous series The Ashmead Heirs by bestselling author Caroline Warfield!

When the old Earl of Clarion leaves a will with bequests for all his children, legitimate and not, listing each and their mothers by name, he complicated the lives of many in the village of Ashmead and beyond. One of them was left out. She is the third of The Ashmead Heirs.

Frances Hancock always knew she was a bastard. She didn’t know her father was an earl until her mother died. The information came just in time. She and her mother’s younger children were about to be homeless. She needs help. Fast. What she wants is a hero.

Eli Benson, the Earl of Clarion’s steward, took great pride in cleaning up the mess left behind by the old earl’s will. When a dainty but ferocious young woman with the earl’s hair and eyes comes demanding help, his heart sinks. She isn’t in the will. She was forgotten entirely. And the estate is just getting its finances back in order. But he knows a moral obligation when he sees one. He may not be her idea of a hero, but people count on him to fix things. He’s good at it. Falling in love with her will only complicate things.

Eli will solve her problems or die trying. It may come to that.

Get your copy of The Forgotten Daughter HERE today!

HOT NEW RELEASE from Elizabeth Rose! Get book one in the Highland Outcasts series today!