HOT NEW RELEASE from Maggi Andersen! Get book three in the Once Upon a Wallflower series today! 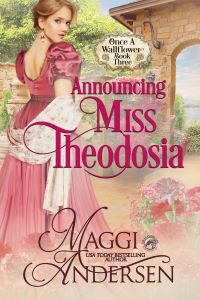 Take an independent miss, a gentleman intent on changing her mind, a dangerous foe, and stir in a whirlwind romance.

Theodosia Tothill attends her first Season with the conviction that all men control their wives. Even her brother’s wife, who used to have opinions, is now intent on filling his nursery and talks of nothing but babies.

Inspired by her poet aunt, Thea intends to remain unmarried while pursuing her dream to write for newspapers. But her father, wary of her restlessness which has exhausted nannies, governesses and run her parents ragged over the years, is just as determined to see her safely married to a good man.

At her first ball, Thea puts her plan into action. While avoiding a gentleman intent on dancing with her, she escapes onto the terrace. Forced to retreat into the garden, she overhears a frightening conversation through the open window in the room above her. A man comes to the window and peers out.

Tackled from behind, she rolls into the shadows, to be held by a strong male body and a voice in her head which urges her to be quiet.

Thea embarks on a dangerous adventure with Lord Ashton Grainger, who she considers controlling and annoyingly inscrutable, but oh, so attractive. And her father, furious at discovering her intention to avoid suitors, becomes more determined to marry her off. He has chosen the man Thea and Ash overheard coldly planning another man’s death. Rather than reveal all to her father, who would send her back to the country, Thea avoids the gentleman intending to work with Grainger to uncover what lies behind the murderous plot. But annoyingly, Grainger refuses to indulge her.

Ash has his own concerns. He dances with debutantes at balls merely to humor his grandfather, the Earl of Highworth, who is keen to see him wed before he dies. After the family suffered a terrible tragedy, his grandfather has become a virtual recluse. With the belief the earl has years left on the earth before he needs to marry, Ash intends to continue his bachelor existence. Until he receives disturbing news which forces him to make a snap decision that will affect both his and Thea’s lives. He comes to realize it was something he wanted all along. But does Thea think the same?

When the murderous foe widens his net to include an innocent child and Thea in his sights, Ash must take matters into his own hands.

Get your copy of Announcing Miss Theodosia HERE today!

HOT NEW RELEASE from Jade Lee! Get book two in the Always a Scot series today!