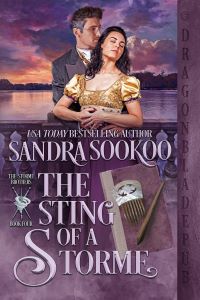 Inspector William Storme is a Bow Street Runner who’s working a series of gruesome murder cases. His dying mother wishing to see him settled adds to the anxiety his position brings. So when he courts a pretty young lady, and she agrees only if he’ll let her accompany him on cases, everything seems to work out fine until the attraction begins and he’s forced to compete with another man for her attention.

Lame and socially shy Miss Francesca—Fanny—Bancroft, daughter of Viscount Nattingly, is a budding society reporter for the General Evening Post, but she aspires to write articles on more important topics. When she encounters the inspector at a rout and he asks to court her, she presses her advantage. What’s more exciting than interviewing a Runner? The plan is sound until she begins to desire the mysterious, oftentimes grouchy man.

While the murders increase, William and Fanny accelerate their investigation of a possible serial killer, but between the shocking scenes, an unexpected romance develops. Emotions swirl around them and truths are revealed as they track down clues and talk with suspects. Passion ignites between them, which leads to the murders becoming personal, bringing danger to them both.

It’ll take intelligence and instinct to catch the killer before it’s too late, because their love and their lives now hang in the balance.

Get your copy of The Sting of a Storme HERE today!

**NEW RELEASE** To Win a Widow by Alexa Aston