Pre-Order now available for the Highly anticipated second book in the Sins and Scoundrels series “PRINCE OF PERSUASION” by Scarlett Scott!!

« Here is another really good book for FREE? Check out Mary Lancaster’s “THE WICKED BARON” » Reserve your copy today for Book 1 in a new series by Author Meara Platt “The Look of Love” 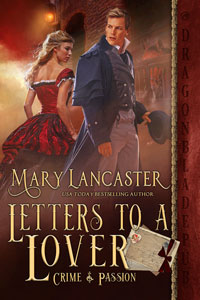 When Azalea, the beautiful Viscountess Trench, receives a note threatening to expose her adulterous love letters unless she pays up, she faces even greater anxieties than most blackmail victims. Not only is her marriage a little too frail to withstand such revelations at this moment, but she can’t actually remember the adultery, let alone writing the letters.

In fact, there seems to be a great deal she can’t remember, which puts her at considerable disadvantage when facing down a blackmailer. In desperation, she turns to her sister Grizelda, recently returned from her honeymoon, to track down the culprit before her beloved husband finds out.

But Eric, Lord Trench, has grown tired of waiting patiently for his wife to come back to him. When he finds her in a bizarre assignation, he sees red, and demands that she gives him her trust and her love. If it is not already too late.

For worse dangers than scandal stalk Azalea and they will need to work fast if they are to save their marriage – and Azalea’s very life.

Maid for the Knight (Irvines of Drum Book 3) 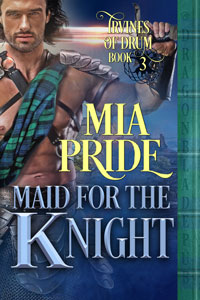 I want ye with a ferocity that frightens me.

Book 3 in the Irvines of Drum is now available! Read for free in Kindle Unlimited.

Abandoned as a wee bairn and lovingly raised by the Keiths, Matilda has spent her entire life pondering her identity. When the truth proves more sinister than expected, she is desperate to hide her shameful secret despite the missives that continue to arrive, threatening both Matilda and her kin. Even death is preferable to losing the trust of those she loves, for surely, the Keiths and Irvines will disown her if they discover their enemy’s blood runs through her veins.

Preferring the life of a traveling knight, Reginald Irvine lives for the moment, never focusing on tomorrow. When ordered to discover the contents of Matilda’s mysterious missives, Reginald relishes the task. He will charm the truth out of the lovely lass, then be off on his next journey. But when Matilda pushes him away and finds herself in danger, Reginald determines to protect her at all costs, even if the cost is losing his life… or his heart.

Tired of the threats, Matilda takes matters into her own hands, and Reginald gladly follows. If their plan succeeds, they will save hundreds of lives. If they fail, they have more to lose than just their heads.

But, when tempers flare, desires are spoken, and attraction turns to passion, the enemy on their heels is no longer the only threat to life as they know it.

Welcome to a new series by National bestselling author Elizabeth Johns. Enjoy the extraordinary tale of four Knight brothers, and one little sister in the Gentlemen of Knights.Book 1, Duke of Knight is now available! Read for FREE with Kindle Unlimited!Can a sharp-tongued governess become indispensa...