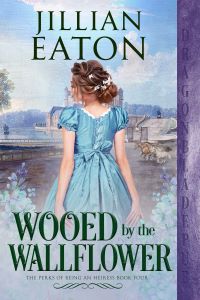 She is a wallflower with a pet squirrel. He is a scoundrel who stands accused of murdering his mistress. They’re not exactly a match made in High Society heaven. But sometimes when two souls are hurting, they turn in a most unexpected direction…

Sterling Nottingham, Duke of Hanover, didn’t plan on kissing Rosemary Stanhope. It was a complete accident, spurred on by too much gin and a temporary loss of sanity. Unfortunately, now that he knows what she tastes like, kissing her again–this time on purpose–is all he can think about.

Rosemary was as surprised as the Duke of Hanover when he kissed her. The sinfully handsome rakehell isn’t exactly known for paying much attention to wallflowers. Yet for some reason, their paths keep crossing…and before long she finds herself falling for the one man who loves her for who she is, squirrel and all.

But just when happily-ever-after is within their reach, an old foe returns…forcing Sterling to choose between the demons of his past or the wallflower that he can’t live without.

Get your copy of Wooed by the Wallflower HERE today!

Tags: jillian eatonregency romancethe perks of being an heiressWooed by the Wallflower
0Likes